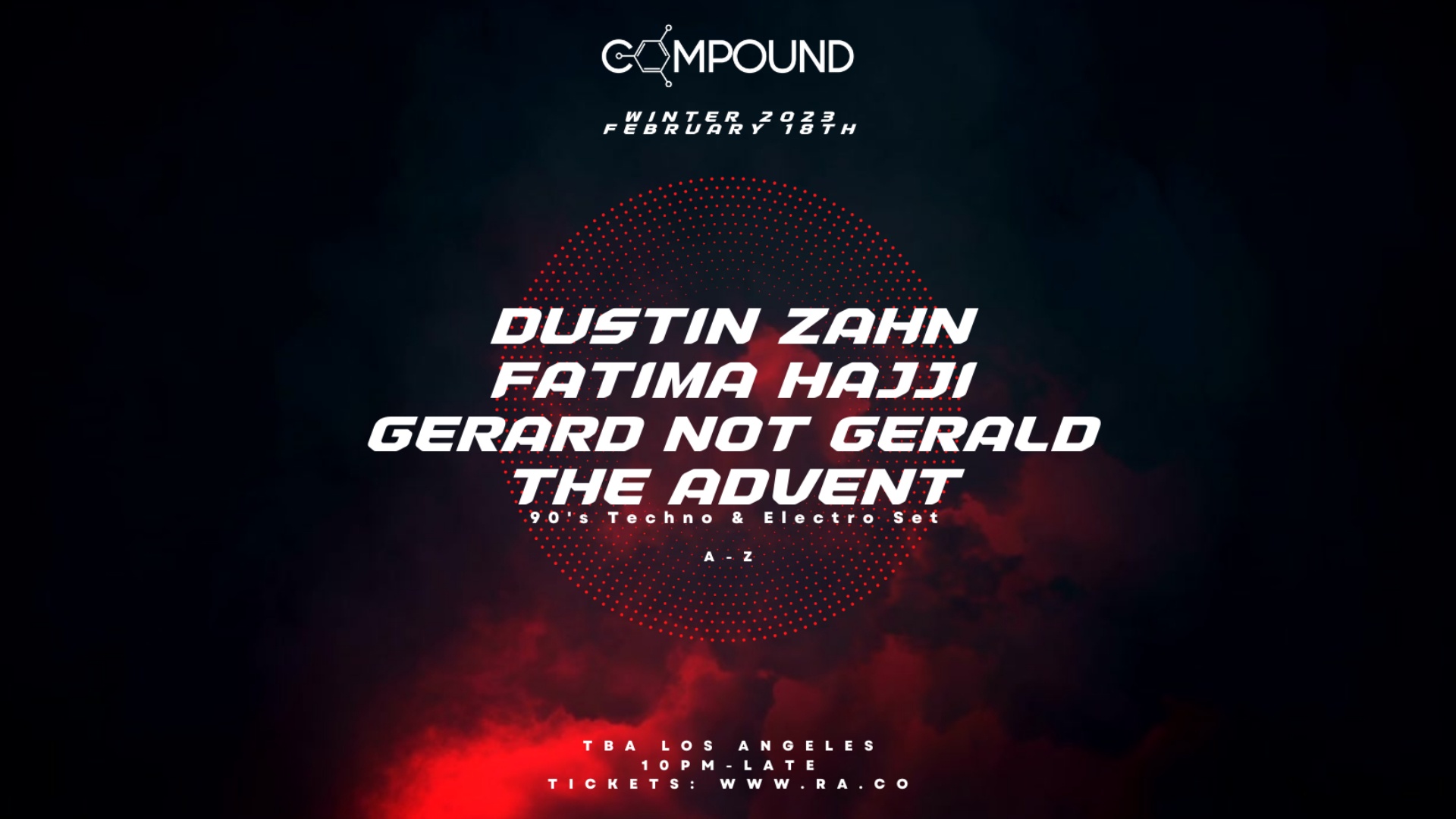 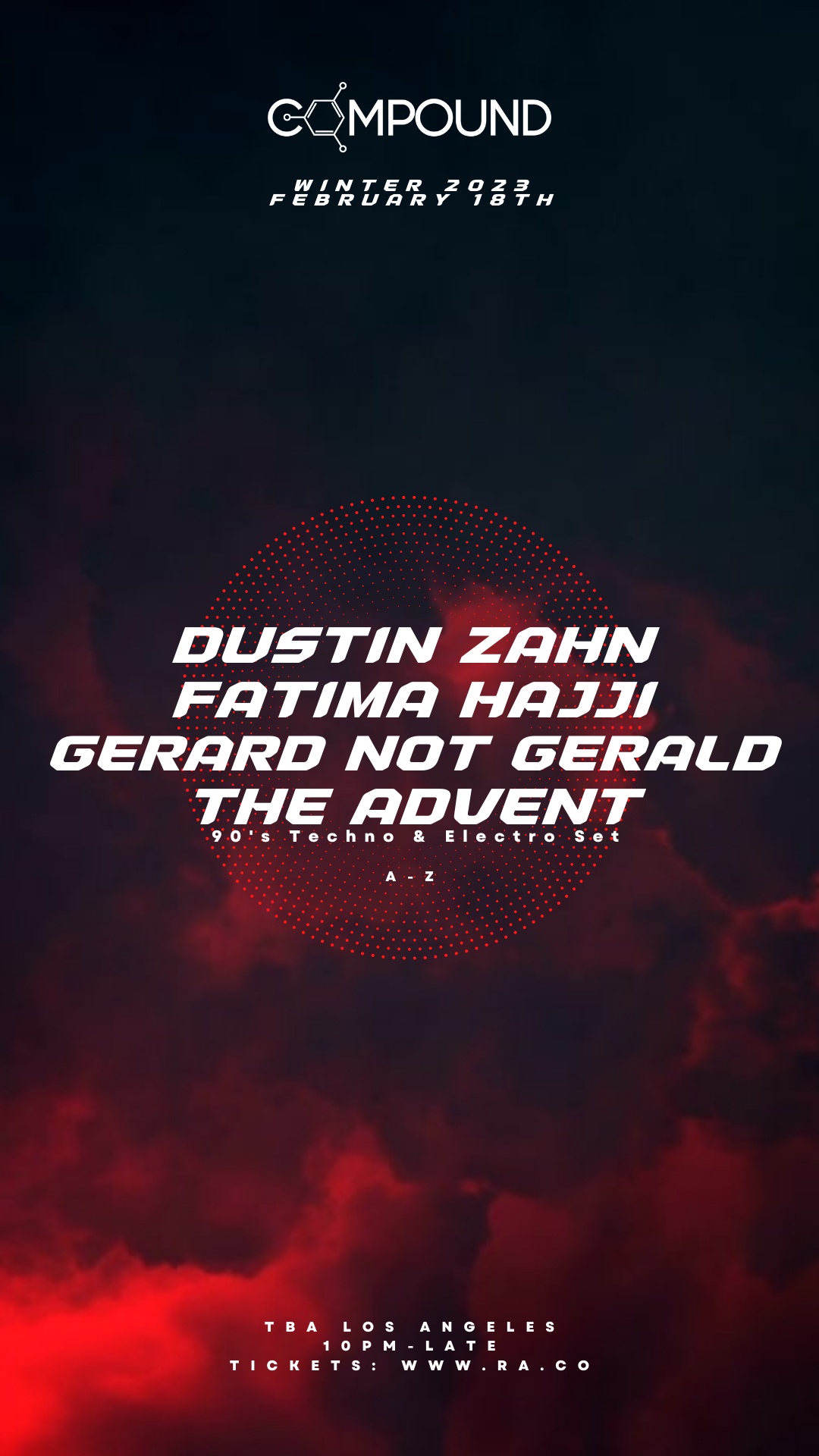 COMPOUND reaches across generations for this one, pairing the ’90s sounds of The Advent with American techno veteran Dustin Zahn and hard techno wiz Fatima Hajji for another all-star, world-class lineup.

COMPOUND’s Winter 2023 edition combines the multi-faceted shades of techno for an underground audio-visual experience unlike any other in North America.

Fatima Hajji – Spanish producer, DJ and Silver M imprint founder, Fatima Hajji has been at the forefront of the techno movement for over two decades, known for incorporating her deep African origins through more contemporary harder techno sounds.

The Advent – A true legend of the scene, The Advent will be performing a throwback 90’s Techno & Electro set for the first time in Los Angeles — a perfect fit for LA’s historic relationship with the warehouse.

COMPOUND is a collaboration event series from Synthetik Minds, Dirty Epic, INCOGNITO and 6AM.

Make sure to grab your tickets and tell all your friends about it!

GERARD NOT GERALD | INCOGNITO, COMPOUND, US

BE IN THE KNOW

Subscribe to our newsletter for up-to-date info about all things INCOGNITO – Los Angeles.
Plus get a surprise Welcome Gift!

Your e-mail address is only used to send you our newsletter and information about the activities of
INCOGNITO and its affiliates. You can always use the unsubscribe link included in the newsletter.
You MUST BE 21 years old and older to subscribe.

Don’t want anyone left out from experiencing and sharing the dance floor with you? Download the files and post it on your socials! Make sure to tag us @iluvincognito

ALLOWED: Small clutch bags or wallets that do not exceed 6.5″ x 5.5″, with or without a handle or strap, may be carried into the venue OR any clear bag options (clear tote or storage bag, with contents visible from the outside).

Starting with our united COMPOUND event on NYE, and carrying forward until further notice, we will be taking action to prevent and minimize the likelihood of theft at any of our events. Part of this includes introducing a new bag policy for all COMPOUND partner (INCOGNITO, Dirty Epic, Synthetik Minds and 6AM) events moving forwards.

We understand that this may cause inconvenience to some, and we apologize for this. However, we have to take action and this is an effort to improve your experience on our dance floor in 2023. We encourage you to always beware of pickpockets, to keep your phones and valuables secure in hard-to-access locations on you, and to report any suspicious activity to our security or any member of staff.

To offer you a better experience, this site uses cookies and similar technologies. By selecting "Accept All" you consent to the use of all of them.
ACCEPT ALLManage Cookies
Manage Settings

This website uses cookies to improve your experience while you navigate through the website. Out of these, the cookies that are categorized as necessary are stored on your browser as they are essential for the working of basic functionalities of the website. We also use third-party cookies that help us analyze and understand how you use this website. These cookies will be stored in your browser only with your consent. You also have the option to opt-out of these cookies. But opting out of some of these cookies may affect your browsing experience.
Necessary Always Enabled
Necessary cookies are absolutely essential for the website to function properly. These cookies ensure basic functionalities and security features of the website, anonymously.
Functional
Functional cookies help to perform certain functionalities like sharing the content of the website on social media platforms, collect feedbacks, and other third-party features.
Performance
Performance cookies are used to understand and analyze the key performance indexes of the website which helps in delivering a better user experience for the visitors.
Analytics
Analytical cookies are used to understand how visitors interact with the website. These cookies help provide information on metrics the number of visitors, bounce rate, traffic source, etc.
Advertisement
Advertisement cookies are used to provide visitors with relevant ads and marketing campaigns. These cookies track visitors across websites and collect information to provide customized ads.
Others
Other uncategorized cookies are those that are being analyzed and have not been classified into a category as yet.
SAVE & ACCEPT
Powered by

BE IN THE KNOW

Subscribe to our newsletter for up-to-date info about all things INCOGNITO
Plus get a surprise Welcome Gift!

Your e-mail address is only used to send you our newsletter and information about the activities of
INCOGNITO and its affiliates. You can always use the unsubscribe link included in the newsletter.
You MUST BE 21 years old and older to subscribe.